The Information Technology Centre (ITEC) provided training for over 55 trainees each year. The ITEC was initiated by Paul Anderson who ran our electronics and alarms classes in the Annexe. Paul had given up his own business and moved into the ITEC at the bus garage to manage the whole scheme. His dynamism, charisma, enthusiasm, leadership and management brilliance was the start that the ITEC needed. In order to facilitate the smooth running of the ITEC, a memorandum and article of association was initiated by HPCC. This allowed the ITEC to be a company within its own rights, with its own directors and management team but reporting to the HPCC. Paul successfully completed his mission with outstanding virtue, then returned to the running of his own business.

“He profits most who serves best.” Arthur F Sheldon

HRH the Prince of Wales visiting the ITEC, Joe Okoli, Chief Executive, to his left

I had the honoured privilege of being a director of the ITEC for ten years and serving as the executive chairman for eight of those ten years. In order to manage the ITEC effectively and efficiently we had invited Sperry Univac, who later changed their name to UNISYS, to provide two directors. It was easy to invite UNISYS, the giant information technology company, because they were literally our next door neighbour. Also invited to sit on our ITEC board was the London Borough of Brent, one director from the labour party and one from the conservative political party. The outstanding success of the ITEC was visible for all to see. Within five years of operation the team at the ITEC had accomplished great things. Features in our local newspapers were a regular occurrence.

“JOE OKOLI is a man with a mission: The newly installed manager of Brent Information Technology Centre in Stonebridge has already made his presence felt with a blizzard of notices reminding people why they are there. One notice, posted at the Centre and sent to youngsters in the borough’s schools, lists four qualifications needed to succeed at ITEC:
‘ambition, determination, personal discipline and the desire to learn’.

“The message Mr Okoli and others are trying to get across is that the spirit is as important as the intellect and they want to train attitude as much as technical skills. ‘People don’t fully understand that the main object is to prepare young people for work in industry. It’s easy to lose sight of that’, he says. Brent ITEC forms part of the Stonebridge Bus Garage Project, an expensive but ambitious £6 million scheme designed to bring training and jobs into deprived areas. ITEC operates government funded youth training scheme courses for 16 and 17 year olds, who are paid £42.99 a week to attend. So far more than 200 youngsters have passed through the Centre since it opened in 1983. They come from local schools and off the dole and 60 per cent get jobs straight after finishing training.

“Chairman of the Centre, Errol Williams, was involved in first setting up ITEC and said the idea is to give the youngsters the right start in life: ‘One of the greatest things is that it keeps them off the street and gets them occupied with something that would not otherwise be available to them’, he said. ‘I never had that opportunity when I was that age.’ Home Office Minister John Patten praised ITEC on a recent visit, saying it would reduce crime by starting young people off on the right foot. But Williams says it does far more than this. The Centre aims to show the young people a more positive way of life, increasing their self confidence and their ability to make the jump between school and work. ‘You can’t just give them the skills’, he said, ‘you have to give them the attitude that goes with those skills.’ So far results have been impressive. Tutor Anil Pandya cites two examples of pupils who completed training and were snapped up by computer firms. Teenager Gary Ford went from the course to Telecom less than a year ago and is now earning £7,500. Another, Richard Grant, so impressed his employers that within weeks of joining them he was put in charge of their computer department. Keeping the Centre up to date with all that is happening in the information technology industry is also important. Two of ITEC’s directors are from computer giants UNISYS, a stone’s throw from the Centre.

“Trainees give the Centre the thumbs up too. Trisha Colquhoun, 17, from Harlesden, said she found the work more absorbing than school. Another 17-year-old, Eugene Shakespeare, is already at work with a computer company while studying at ITEC. Brimming with the confidence he said ITEC has given him, he said the use of work experience was a good way of giving trainees some idea of what they would find once they enter the world of business. The spirit at ITEC seems to be infectious. Even the football team is doing well. In the two years of competing with 15 other teams from around London in the ITEC cup, it has won the trophy on both occasions.” 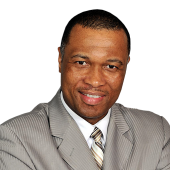 Developing Attitude, Skills and Knowledge through learning I am an International Management Trainer with over 36 years experience. I have trained thousands of directors, managers, leaders, supervisors and unemployed people. My passion is to coach one million students to unleash their unlimited potential through personal growth. I was co-founder and Executive Chairman for one of Europe’s largest multi-million pound community complexes, launched by HRH the Prince of Wales in 1988. For over 25 years I have visited, counselled and ran training courses for UK prisoners. Currently I am a Senior Pastor and Regional Overseer who sits on the National Executive Board for the Church of God of Prophecy UK Trust. I have taught Systematic Theology for over ten years. I am married and have six children and six grandchildren. I am the author of “Pursuing Excellence”, “The Temptation Trap”, “Sowing For A Blessing”, “TIPS For Dealing With Difficult Conversations” and “Building A Dream“. During the 2010 general election I stood as a Parliamentary Candidate. I am a professional photographer, graphics designer and web developer. My hobbies includes chess, squash, backgammon and domino.

Register today to attend our 40th celebration and public meeting.

You have Successfully Subscribed!